We are a multi-disciplinary practice that specializes in combining the treatments offered by sports medicine doctors, sports physiotherapists, registered massage therapists, athletic therapists, and chiropractors to give you the most comprehensive treatment plans that are tailored and customized to suit your needs.

Massage therapy is an effective form of therapy to treat stress-related conditions, minimize pain and anxiety, as well as treat many other physiological ailments such as back and muscle pain and so on.

It is advisable to only utilize a registered massage therapist to treat your condition. Massage therapy provided by unqualified therapists may cause injury as they do not have experience or qualifications to properly recognize injury.

With the combination of treatments we have available such as physiotherapy, chiropractic treatments, and massage therapy, we have all the resources we need to expertly diagnose and treat your condition whilst providing the best advice backed by the collective experience of experts in their respective fields.

The benefits of massage therapy at a wellness center

Is seen as a preventative form of Healthcare that can help eliminate pain from muscle strain and tension.

It is also effective at eliminating common aches and pains and treating the symptoms of more chronic conditions such as high blood pressure and diabetes.

The clinic provides a relaxed and friendly atmosphere for you to heal and recuperate in.

We know that each individual is unique, and that is why we have the necessary resources available to ensure that you get the personalized care and attention that you need.

We are forward-thinking and offer the most innovative treatment plans and modalities that speed up the recovery process.

1. What do you wear during body treatment massage?

You are advised to wear loose-fitting clothes that are easy to move in, and if you are experiencing any conditions related to the foot or the ankle, you are to please wear running shoes as these form part of the treatment process.

2. What to bring to your first appointment.

Insurance forms, a referral (only if you have one), and the necessary prefilled documents.

3. When does the actual treatment begin?

After undergoing a physical exam and assessment by your therapist, you will start treatment on the same day.

4. How much does massage therapy cost in Ontario and am I covered by OHIP?

A session can range from $ 65 for a thirty-minute session to $ 150 dollars for a 90-minute minute session and is not covered by the OHIP.

If you are looking for massage therapy with a difference, contact us today to see how we can create a tailor-made treatment plan just for you.

Sports are fun but injuries can sometimes occur. As healthy as an active lifestyle is, strenuous exercise or illness can affect sport performance and professional help may be urgently needed to prevent, treat and heal those affected. Sports medicine is a relatively new type of practice aimed specifically at this type of treatment.

Do you need a sports therapist or want to find out more on sports medicine? We have a handy guide for you!

What is sports medicine?

Sports medicine relates to medicine concerned with the prevention and treatment of injuries and disorders that are related to participation in sports. It focuses on all matters relevant to the active individual, sports athletes or even kids sports, as well as an extensive focus on musculo-skeletal conditions.

Sports medicine makes use of scientific research and knowledge to ensure that athletics receive the best advice for optimal performance. It involves not only orthopedic medicine, but also extends to medical specialties in cardiorespirology, psychiatry, and a clear understanding of the needs of the athletes.

Some of their healing abilities include:

Physiotherapists for sports medicine related disciplines can range between $70.00 per visit to $120.00 per treatment. This is inclusive of administrative time, treatment plan preparation, inter-professional and professional- insurer consultations.

There is currently no OHIP coverage for Physiotherapy and Chiropractic care under the Health Insurance Act.

Pelvis physiotherapy is covered by various medical schemes but unfortunately OHIP does not cover it.

Yes, sport medicine doctors are covered by OHIP providers if you have a valid health card. Some treatments such as injections, however, will incur additional costs.

Sports Medicine Specialists at Sheddon Clinic are qualified to;

Some of the benefits of visiting our sports clinic in Oakville, Ontario include:

Our sports and physiotherapy clinic with commitment to care with extended hours and a strong network of professionals at your disposal.

We provide a comprehensive doctor treatment plan that is suitable and convenient for you.

Our experts have attained post graduate qualifications in Sports Medicine, as well as their specialty in General Family Practice – ensuring that you are in only the best hands!

Contact our clinic to book an appointment with one of our specialists.

Happy Earth Day!! While this is a difficult time, and we are all staying home to help stop the spread of COVID 19, the earth is also getting a chance to heal itself. The skies are cleaner and the waters are clearer. When COVID-19 is behind us, we will need to be mindful of the environment and to take individual action, so that we can continue to see the blue skies. During this difficult time, remember to take care of yourself, go for walks, take stock in your life and take the time to get some fresh air and appreciate Earth Day.

The most effective way to reduce waste is to reuse and recycle. So today, we are going to recycle a great, old article on Achilles Tendon Rehab.

Injuries to the Achilles tendon is one of the most common injuries experienced among athletes, especially runners and soccer players. Statistics show that roughly 24% of athletes develop pain in the Achilles. It’s also an injury that can linger for long periods of time, if left untreated. One recent study found that 63% of athletes with Achilles tendinopathy still had symptoms two years after onset.

Causes of Injury to the Achilles:

What does Treatment entail:

Initially one of the main focuses of treatment is decreasing the pain, which can be achieved through rest, manual therapy, taping and heel lifts. After this brief period of rest, a proper graduated exercise program is  one of the best ways to promote tissue repair.

Watch the video below for examples:

To pamper yourself, we are offering Gift Certificates for Massage.

Get yours now to help show the ones you care about, that you care enough to see them feel better.

Hamstring injuries have been reported as one of the most common injuries across a variety of sports that involve repetitive kicking and/or high speed running, such as soccer, track and field, football, and rugby. Re-injury rates are also an issue affecting many athletes long term, with roughly 30% of athletes suffering a re-injury to the hamstring within the first year. In order to prevent hamstring injuries it is important to understand WHY they occur, and to develop a prevention program which targets these risk factors.

What are the Risk Factors?

Age
Unfortunately, the older you get, the higher your chance for hamstring injury. The age when the risk starts to significantly increase is 25 years old, with research suggesting a 30% increase in risk annually thereafter.

Muscle Imbalance/weakness
Muscle imbalance within the lumbopelvic region and/or weakness in the hamstrings;

The Most Effective Hamstring Prevention Program

Eccentric Strengthening Program
The majority of hamstring injuries occur during sprinting when the muscle is working eccentrically. As such, eccentric strengthening programs have been shown to decrease the risk of hamstring injury by 65-70%. The most popular and widely studied exercise for hamstring injury prevention is The Nordic Hamstring Exercise. We strongly encourage all athletes to add this exercise to their strengthening regime. However, it shouldn’t be the only hamstring exercise you do. While it has been shown to decrease the risk of hamstring injury significantly, it only activates part of the hamstring muscles (specifically the semitendinosus and short head of the biceps femoris). 80% of hamstring injuries occur to the long head of the biceps femoris, which is better activated with a hip extension exercise such as deadlifts. The most effective hamstring injury prevention program should focus on targeting all the hamstring muscles with both knee and hip dominant movements. Below you will find 2 different exercises: the nordic hamstring exercise and straight leg weighted deadlifts. We recommend doing both for the greatest benefit. See a progressive 12 week schedule below:

Nordic Hamstring Exercise: Can be completed with a partner holding your legs or hooking feet under something heavy. Lower yourself forward, keeping your back and hips straight. Once you cannot go any further push yourself back into start position. 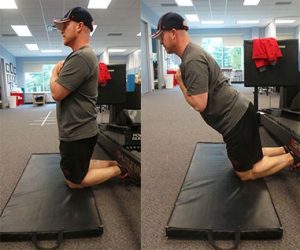 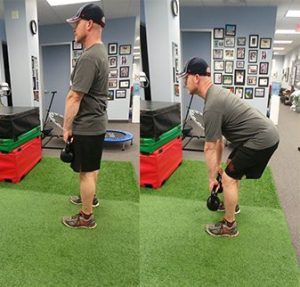 Work on your core
While strengthening the hamstrings is important, you can’t forget about everything else that helps support, align and coordinate the hips. If there is an imbalance around the hip such as tight hip flexors, weak glutes, etc., the hamstrings will be more susceptible to injury. In addition, exercise programs that focus on trunk stabilization and agility vs. a traditional program of ONLY hamstring stretching and strengthening post injury results in a quicker return to sport and significantly much lower reoccurrence rate (7% vs. 70%).

Running Program
Most hamstring injuries occur during sprinting, especially later in the game when fatigue sets in. Therefore, strengthening and isolating the hamstrings in the gym is essential, but you must also include interval speed training to improve coordination, large hip/knee joint torques, and explosive strength. Weekly sprint workouts have been shown to prevent hamstring injuries. Like all training loads, ensure the sprinting load (distance, reps and speed) is progressed gradually.

Where to go from here?

If you currently are suffering from a hamstring injury it is best to book an appointment with a therapist and get on an individualized rehab plan. If you are currently injury free and would like to stay that way, then add the above hamstring exercises to your current strengthening program following the 12-week plan. If you want more bang for your buck, then add some core and hip stability exercises as well. If you still have questions or want more guidance on injury prevention book an appointment with one of the Sheddon Physiotherapy and Sports Medicine therapists at 905-849-4576.

We are located only 6 min East of Oakville Place and 4 min East of Whole Foods Market on Cornwall Rd.

Sheddon Physiotherapy and Sports Clinic (SPSC) has been a member of the Oakville community for over 10 years and strongly believes in being involved within the Oakville community and giving back to those who have supported us throughout the years, as well as helping those who are less fortunate. Overall the next few weeks, Sheddon Physiotherapy and Sports Medicine will be collecting donations for its Christmas Food and Toy Drive.

Food donations are in support of the Oakville Fare Share Food Bank and will be collected until the new year.

Toys will be collected until December 18th, 2018 in Support of the Oakville FireFighters Toy Drive

Make this Holiday Season Special for others.