What are the benefits of Foam Rolling?

Foam rollers, “The Stick,” lacrosse balls, and tennis balls are all common tools used for self-myofascial release (a.k.a., giving yourself a massage). Anyone who has ever used any of the above tools for self-myofascial release has a love-hate relationship with it. Even though it hurts so badly while you’re doing it, it feels so good afterwards. The most common of the above tools is the foam roller; you see them lying around most fitness gyms, physiotherapy clinics and sports team locker rooms. For years clinicians and trainers have been using self-myofascial release with their clients, but only recently has research started to look at what  it actually does.

Cheatham et al., (2015)  and Wiewelhove et al., (2019) published a systematic review and meta analysis on the effects of self-myofascial release using a foam roller to help support its use in clinical practice. Their findings are outlined below:

All examined studies demonstrated that foam rolling improved one’s range of motion, with increased benefits if it was followed by a static stretch of the same muscle group.

Most studies had parameters of 30 seconds of rolling for 3 sets, followed by a 30-second stretch for 3 sets/muscle group. 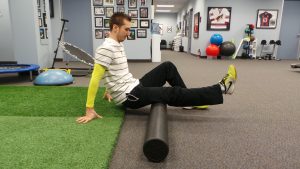